Honors Essay Prompt
So far this year you’ve learned about the foundations of our constitution, federalism, the inner workings of congress, how interest groups work, the role of the president, and the inner workings of the federal bureaucracy. Now you have the opportunity to show that you learned something.
Your midyear assessment will be based on the concept of creating a law. As you have learned by now, this is a complicated process that requires the attention of many different groups of people. Your job is to show how that process works.

First you need a bill. Think about something that needs to be fixed in this country, and write a bill to deal with it. There are several things that need to go into a bill, all of which are outlined in the Appendix below. Here are some things to keep in mind as you draft legislation:​
In the end, you should have a one page bill that is ready for Congress, but you need to rally support for the bill first.

Every bill needs a little help from outside groups to get passed into law. Research your topic, and look for two interest groups who might be inclined to support your bill. You will then write a paragraph about each one, including the following information:
​Remember that not every member of Congress will support your bill, so good interest group support will go a long way to getting your bill signed into law.

Step 3: Shepherd the bill through Congress

This part will be a little complicated, depending on the bill you’ve written. Your next goal is to chart how the bill works its way through Congress. This too, comes in several steps:

Step 4: Signing the bill into law

I guess I get to be the president too (the benefits of running the show, I guess). Once you’ve finished everything to this point, I’ll give it my signature or veto. If I sign the bill, you can move on. If not, you need to go back and fix something. I’ll issue a signing statement to give you some guidance here.

Once a bill is signed into law, the bureaucracy takes over. During the bill-writing process you should have indicated which agency would enforce this law, so it is now up to them to create rules to make it happen. This can be accomplished in as few as one really well-written rule, if your law allows for it, or it might take a few to fully implement the rule. There are some example rules in the Appendix. Here’s what you need in this section:

Step 6: Putting it all together

Once you have finished all of the steps above, you need to compile the project and submit it to me. This will be done ON PAPER. You need the following for full credit:
Components of the project:
BONUS POINTS: All laws and rules are organized in the Federal Register, which is similar to a Dewey Decimal System, just with more parts. If you can accurately create the designation for your rule. It will look something like this:
45 CFR Ch. 4 §400.93(a) -A State must provide any refugee wishing to apply for medical assistance an opportunity to apply for medical assistance and must determine the eligibility of each applicant.
The GPO (Government Publishing Office) records all of these rules, and you can browse them at their website to get an idea of what area of the federal code your rule will fit into. The basic construction of the code is in the Appendix.

Section A: Bill Template
Note: Every line in a bill is numbered. To achieve this, write the bill normally, then create a 2x1 table. Put the numbers in the left box, and the text in the right box. Space accordingly. 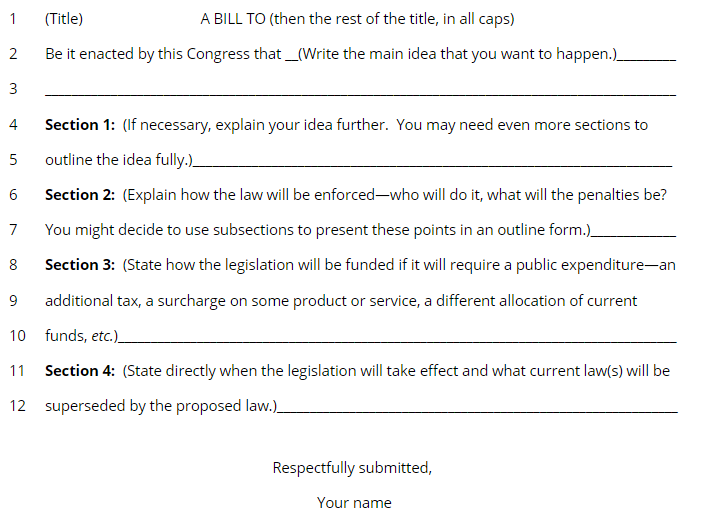 Section B: Example Rules/Regulations
This is taken from the FCC’s recent rulings on Net Neutrality, or “Open Government”:

A person engaged in the provision of broadband Internet access service . . . shall not block lawful content, applications, services, or non-harmful devices . . .

A person engaged in the provision of broadband Internet access service . . . shall not impair or degrade lawful Internet traffic on the basis of Internet content, application, or service, or use of a non-harmful device . . .

​A person engaged in the provision of broadband Internet access service . . . shall not engage in paid prioritization (the management of a broadband provider’s network to directly or indirectly favor some traffic over other traffic).

They sound a little like the Ten Commandments; feel free to model yours in a similar way.
Section C: Bonus Opportunity
Once you write your rule, create its Federal Code designation for up to 5 bonus points.